Hi folks and if you were there for the book launch many thanks for coming and helping  make it such a happy  event.
The new website for Bomber Jackson is now up and running complete with a secure mail order facility-please have a look at the great job Karl  has done on it: www.bomberjacksondoessome.com
The website will inevitably become the main platform for Bomber Jackson over the next period but please feel free to have a look on here as well.
Cheers
Bob
Posted by Bob Boyton at 22:20 No comments: 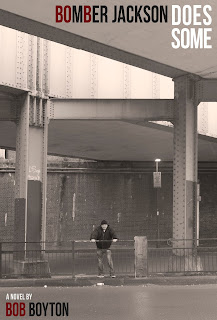 
Bomber Jackson Does Some will be available from mid May 2012 price £8.99 from all good independent bookshops and via the Bomber Jackson website (details to follow) + plus postage.
Posted by Bob Boyton at 21:56 No comments:

Bob in the Big Apple

Just back from New York City where an open mic spot atThe One and One in the East Village went well.Looking forward to going back to do more now I know they can comprehend cockney.
Posted by Bob Boyton at 15:31 No comments: 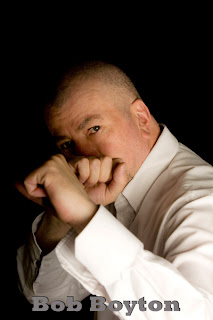 Information for Producers and Bookers
Bomber Jackson Does Some and On The Out both work best in a small studio theatre or a
space that can be turned into one temporarily although Bob has performed both shows in non theatrical spaces.
Bomber Jackson Does Some runs for about 45 minutes and On The Out for around an hour.
Because of it's length the first show makes an excellent piece for training events
in the not for profit sector and Bob can be available to facilitate a Q & A session after the performance for such an occasion.
Posted by Bob Boyton at 20:13 No comments:

Back in london now


Back in London now after two performances of 'Bomber Jackson Does Some' to appreciative audiences at The Laughing Horse @ The Quadrant,
as part of the Brighton Festival Fringe.
Sadly such a limted number of performances meant getting reviewed proved impossible but in drumming up an audience I visited the AGM of
The Sussex Ex Boxers Association and The Old Timers column in Boxing
News were kind enough to say, '..to get himself ready for the role Bob has been training with Mark Reefer (former British and Commonwealth Champion) and looks as if he could go a few rounds himself.' Surely a fringe first ! 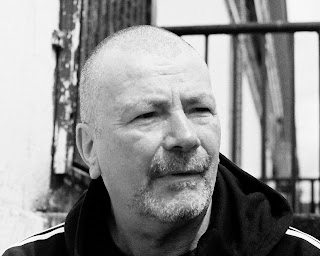 BRIAN by Bob Boyton
It's half past two Wednesday morning and up until now it's been about as deadly as it gets which is why I'm taking a risk on getting into one with a black cab by mooching a fare off the pavement.
He was outside a pub called the Bull and Pump on the corner of Huntley St. and Tottenham Court Road. Going by the way he's leaning over he's just come out after a substantial session. Tottenham Court's a double width one way and I was right the other side of it with traffic behind, pushing me on, so I probably only noticed him because of the white raincoat he's got draped over his arm. I had to let a few go and then I cut across eyeballing the road in the mirror to make sure a black cab or old bill doesn't see me pick up in the street.
I have a look at him as I'm coming to a stop, close up he's definitely pissed. He's got his collar undone with his tie flapping about in the wind and his suit's hanging off him the way even posh clothes do when you're drunk. By his feet there's an extra large briefcase so I reckoned he must be some sort of high up office worker.
I leaned out of the window and said, `Mini cab?'
He just stood there looking down at me through his glasses for a long time, twitching them up his nose a couple of times as if it was a nervous tic.
The he shrugged and said, `I'm in finance.'
Judging by his stupid smile he still thinks he's in the pub having a joke with his mates.
If I wasn't boric I'd have left it and pulled away but I'm wearing trainers that let the rain in and the social have just cut her money off because they've caught up with me being back round there.
I said, `Do you want a mini cab.'
He smiled and said, `Sure why not, 26 Harcourt Avenue, between Willesden Green and Dollis Hill, get to Willesden Green and I'll show you from there.'
I've got a rough idea and he doesn't look as if he's going to notice much, so I reached over to open the back door and said `Jump in.'
I pulled away up Tottenham Court and tried to make my mind up. It was Willesden Lane I needed so I had a choice, either Euston Road, then Edgware Road to Kilburn, or Mornington Crescent up to Swiss Cottage, over the roundabout and through to Kilburn that way. There wasn't much in it and the state of the motor I reckoned I was better off sticking to the back doubles in case I got a pull.
The punter was sitting in the back staring into space, he was so still he looked like a big doll with glasses.
I was keeping an eye on him in the mirror every now and then just in case he started to look as if he was going to be sick but he just sat there, like a big buddha or something.
He was so dozy that once I was off the main drag I figured I was alright to have a bit more charlie. I've licked a finger tip and then poked it into the envelope, trying to make sure that I don't get more than a little dab because this lot's good enough to make me go whoosh if I overdo it.........
Posted by Bob Boyton at 23:47 No comments: